Quote Of The Day

Jeff Jarvis gets it exactly right:

2. The press is supposed to distrust, or at least watch and be skeptical about, the government, and so it must not set itself up in a position to be beholden to government.

3. We should invite no compromise to the protection of the First Amendment Congress shall make no law.

Sometimes, the simple and obvious answers are also the correct ones. I really don't think that this is a complicated issue... 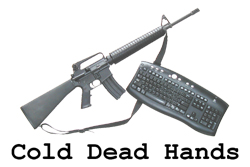 This Is So Wrong

Ed Klein is an evil, stupid man. If Drudge is to be believed, Klein is claiming in his new book that Bill raped Hillary Clinton, resulting in the conception of their daughter.

He appears to base his allegation on a single anonymous source.

This is beyond irresponsible, it is disgusting. Of course, I suppose I shouldn't be surprised:

Klein is the former foreign editor of NEWSWEEK and former editor in chief of the NEW YORK TIMES MAGAZINE.

Peak Oil Can Make You Rich

Peak Oil seems to be the latest fixation of the doomsayer crowd these days. Everything is going to go to hell, see, because we are running out of oil right now. Prices will soon skyrocket and the modern world will grind to a halt, leaving us all wishing we had migrated to sustainable organic farms while we still had the chance. It's incredible how many people believe this stuff.

Well, if you do believe it, I've got some great news for you. You're gonna be rich!

Go here, and right under the words New York Mercantile Exchange you'll see a little icon representing an oil well. Click on it, then click the I Agree button, then select the Futures tab under Light, Sweet Crude (yum!) and then select Current Expanded Table there on the left. Got it?

You're looking at the current prices for oil futures, right out until December, 2011. Anyone can buy them. When you buy an oil future, you're basically betting that the price will go up. If it does, you pocket the difference.

Stupid capitalists! Will they never learn? They sit there in their idling SUVs and imagine that oil will stay this cheap forever...

Well, now is your chance to fleece those dumb bastards for all they are worth. December 31, 2011 can be the day your personal fortune rolls in. Go ahead, invest everything you've got.

The Tradesports prediction market is currently giving 1.3:1 odds of Michael Jackson being found guilty of "at least 1 of 7 counts alleging lewd or lascivious acts against a minor". It's been creeping a little higher each day the jury has been out.

This, Of Course, Is Entirely The Dog's Fault

Finally, I'm going to point out the single most disturbing news item I've seen in some time:

The mother of a 12-year-old boy killed in his own home by one of the family's two pit bulls says she had been so concerned about one of the dogs that she shut her son in the basement to protect him.

[...] "I put him down there, with a shovel on the door," Faibish said in an interview with the San Francisco Chronicle. "And I told him: 'Stay down there until I come back.' Typical Nicky, he wouldn't listen to me."

[...] Faibish found her son's body in a bedroom. He was covered in blood from several wounds, including a major head injury.

No charges have been filed.

"It's Nicky's time to go," she said in the interview. "When you're born you're destined to go and this was his time."

No charges filed? Hello? Aren't criminal negligence and child endangerment still against the law around here?

The dogs, of course, were killed. Maureen was not even neutered.

Kerry Pulls A Fast One

You might think that John Kerry finally released his military records today. You'd be wrong.

The story was only minutes old when I noticed this comment on Free Republic:

You don't send the SF 180 to the Department of the NAVY unless you are currently active duty. The request goes to the National Archives Center for retired military records.

The gentleman appears to be correct. Here's what John O'Neill has to say:

Unless you are active duty, most of your records are at the Personnel Records Center archive. That's the place you send your 180, not the Navy Department. Why didn't he just send his 180 to the local Wal-Mart? It would have had about the same effect.

I guess this solves the mystery of why no new information is available.

I don't know what's worse - what it is that he is hiding, or the incompetence with which he tries to hide it. You'd think, of all people, that John Kerry would have learned that this sort of thing just doesn't work anymore. Does he really think his pet newspaper can still protect him?

A Powerline reader noticed this, too.

In Summary it is impossible to guess what is in Senator Kerry's Navy personnel file. The ONLY way to obtain a true and complete version of the file is to have Senator Kerry sign a release and an SF180 allowing the bearer of the SF180 to obtain any and all of his Military Service Records from the National Personnel Records Center, a branch of the National Archives. The NPRC is the only Government organization that has and can release a copy of his complete personnel file.

(Via Poster "SLJ" at Blogs For Bush)

This medical pot ruling is far worse than you may realize. I'd hoped the court would have wimped out and relied on a 'compelling need' argument, but instead, it seems to be based on an earlier case called Wickard v. Filburn. This is a disaster, as Wickard was one of the most fucked rulings in modern times.

I shit you not:

"The case," Stevens wrote, "comes down to the claim that a locally cultivated product that is used domestically rather than sold on the open market is not subject to federal regulation. Given the Act's findings and the undisputed magnitude of the commercial market for marijuana, Wickard and its progency foreclose that claim."

Back in the 1930s, the government did stuff they could never get away with now. One of their big ideas was nationwide price controls on products and wages. To do this, they actually set production limits on basic goods.

A farmer, named Filburn, grew wheat on his own farm for his own use. This was in excess of what the federal government allowed him to grow, so they arrested him.

Think about that for a minute.

Filburn went to court, and lost. Why? The commerce clause, of course. Since the feds have the power to regulate interstate commerce, they therefore have the power to regulate how much a wheat a farmer grows for his own use. Incredibly, this was based on the logic that any wheat he grows for himself is wheat that he would have otherwise purchased! That means that his personal garden falls under the commerce clause, and the federal government can, and did, tell him exactly how much he could plant, and arrested him when he failed to comply.

I am not making this up. Think for a moment what this new version of the commerce clause doesn't cover. See if you can imagine any limits whatsoever on the scope federal power.

Now the Wickard ruling has been enshrined by precedent. As of today, it's officially a bedrock part of the legal landscape.

Leftist motherfuckers. There is nothing remotely liberal about this. When the next crop of political hacks uses the commerce clause to jam their ideology down our throats I hope everybody remembers this.

O'Connor, Rehnquist, and Thomas voted against this... what the fuck planet was Scalia on??!

"If Congress can regulate this under the Commerce Clause, then it can regulate virtually anything--and the Federal Government is no longer one of limited and enumerated powers." [...]

"Certainly no evidence from the founding suggests that "commerce" included the mere possession of a good or some purely personal activity that did not involve trade or exchange for value. In the early days of the Republic, it would have been unthinkable that Congress could prohibit the local cultivation, possession, and consumption of marijuana." [...]

"Whether Congress aims at the possession of drugs, guns, or any number of other items, it may continue to appropria[te] state police powers under the guise of "regulating commerce". [...]

Justice Thomas, writing for the minority.

I corrected a minor error above - the farmer's name was Filburn, not Wickard.

I'd like to add that I think 'Filburn's Farm' would be a pretty cool name for a blog.