I have an old, cheap rifle scope that went scrod on me the other day. The optics were still good, but the adjustments were wandering all over the place. I almost threw it out, but I was bored, so I cut it open instead.

Good thing I was bored. I almost threw away a fine set of tools. 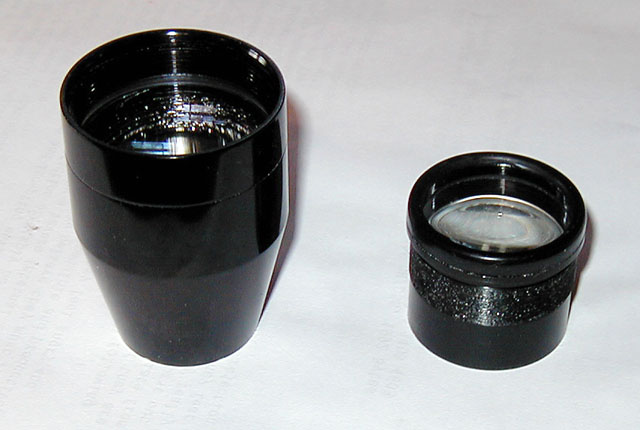 This first bit is the objective bell, the part furthest from your eye. I sawed it off with a dremel tool, and smoothed the edges by rubbing it flat against some sandpaper. It's made of very thin aluminum and was no trouble at all to work. The second bit used to be the part closest to your eye. It just unscrewed by hand.

The former objective bell now is the nicest, clearest, brightest magnifying glass I ever had. It seems to provide about two power magnification, and works perfectly no matter how far from your eye you hold it. 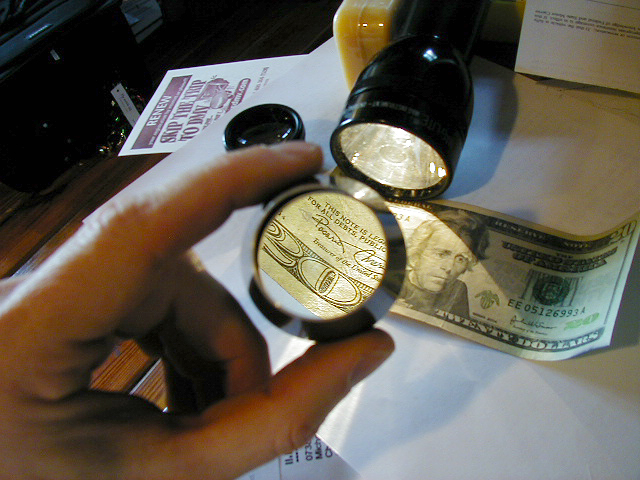 The second bit is also useful as a hand magnifier, but provides a much stronger magnification. The focal length is quite limited, but it is also remarkably clear and bright. 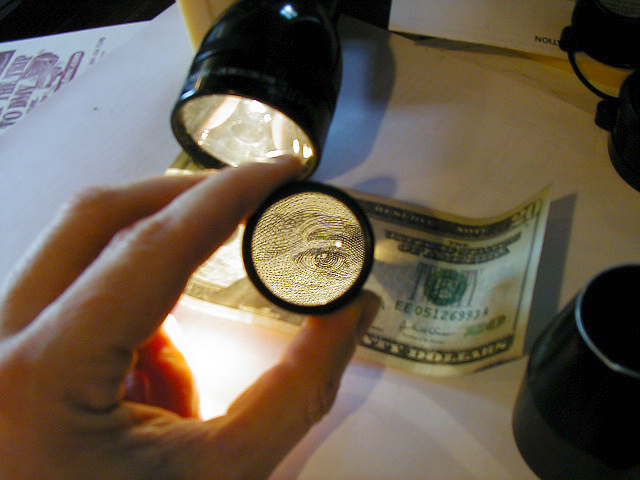 Incredibly, these two parts work well together in a graceful way. There's no need to monkey with the distance between them, just rest the finished edge of the objective bell atop the other and you are good to go.

Here's a $20 bill, as seen through the first magnifier. Note that tiny string of text there near the center of the image. 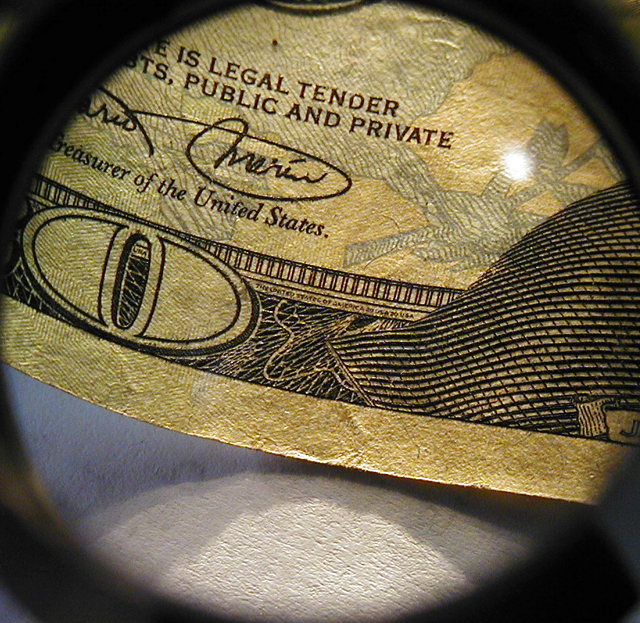 Here's the same image, as seen through the second magnifier. 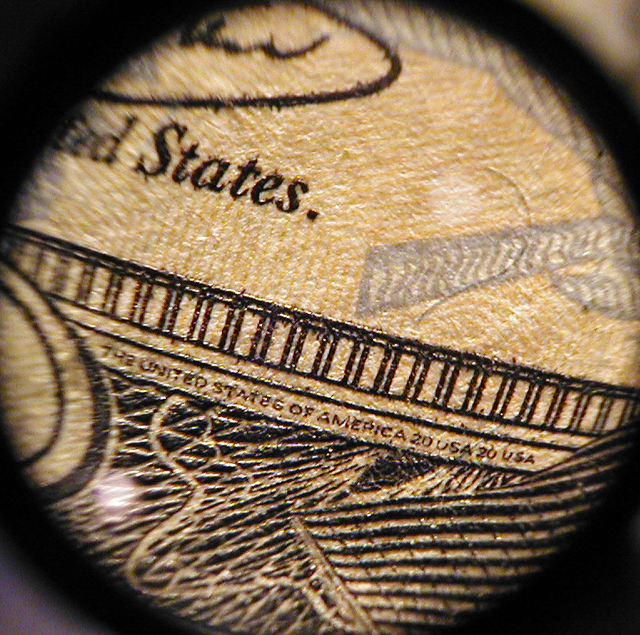 Here's what you see through both of them. It doesn't look much different because I've scaled all the photos the same, but in practice, it looks almost twice as large. 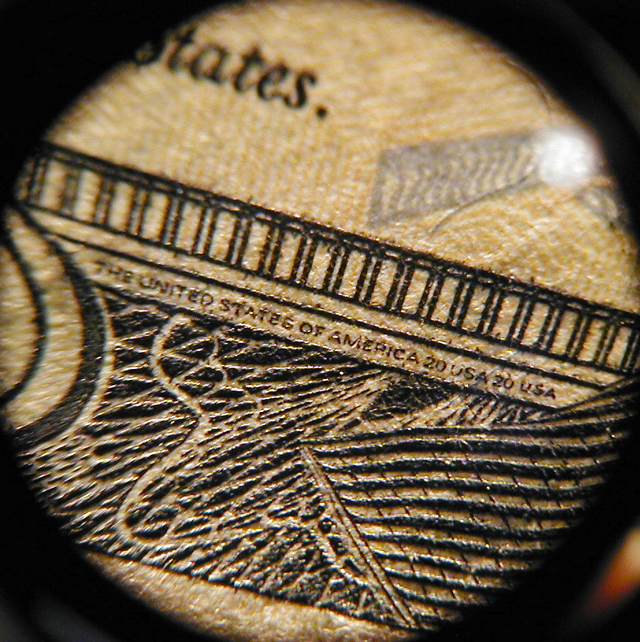 This is the full resolution available from my (ancient) digital camera. Seriously, this is not bad for a hand-held, junkyard lens. 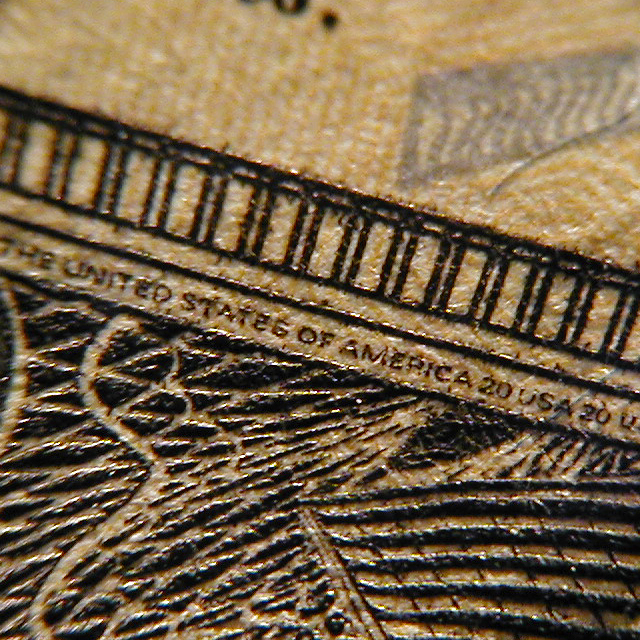 OK, This Has Gone Far Enough.

For those of you who haven't been watching your scorecards, Comedy Central, like Borders Books, has been directly cowed by threats of violence. They have chosen censorship over the risk of physical harm.

I shit you not:

"Comedy Central's belief in the First Amendment has not wavered, despite our decision not to air an image of Muhammad. Our decision was made not to mute the voices of Trey and Matt or because we value one religion over any other. This decision was based solely on concern for public safety in light of recent world events."

This is not OK, and now it's time for us to stand up.

Comedy Central, like Borders, is not the problem here. These guys are running a business. They do not maintain an army, and it is not their job to take on the physical burden of protecting our freedom of expression. That's fine. It's our job to protect our own freedoms, and it's our job, not theirs, to meet this push with a good solid shove in return.

Think I'm kidding? Who else is supposed to do it?

Look, we all know what to do about this. Whenever some fundamentalist twit decides that free expression is an affront to godliness, we remind him of how we, as a nation, have long ago decided to prioritize these values. We take the very thing that he wants to censor and we publicize it everywhere, not as a provocation but as a conclusive demonstration of our inalienable rights. We overwhelm him with our numbers and our strength, and we show him that a free people cannot be browbeaten into silence. 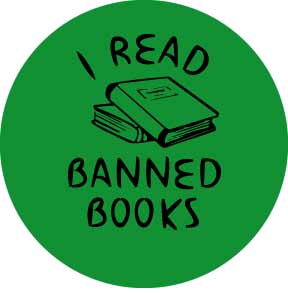 There is no need to provoke our Muslim friends, no need to condemn anyone on their basis of their faith. We don't have to do anything wrong to stand up for what is right. We can shove back without trashing everything in the room.

I want that tape. I want that censored section of tape, and I want to mirror it right here, and I want every stand-up blogger in the world to do exactly the same thing. I want to post my link behind a careful explanation of why it is necessary for me to publicize a thing that so many good people would find hurtful. Our friends will see our reluctance and will understand that there is a larger issue at stake. They don't have to follow the link if they don't want to, and I don't have to hide it from those who do. Fair's fair, and that's how we do things in this part of the world.

We never had much of a problem with this sort of thing back when the arts community was concerned only with Christian fundamentalists. They were happy to not only push back, but to openly provoke. Some did it with civic sincerity, while others saw it as an opportunity to vent their own angry bigotry. Either way, there was no shortage of examples.

If any of this old guard has managed a similar response to either Theo Van Gogh's murder or to the very real, physical intimidation of bookstores and television networks I've failed to see it. That's fine, because we don't need them. They don't lead us, and we certainly don't depend on them to protect our freedoms. It's our duty to do this ourselves.

I want that tape. Help me find it, and help me to shove it right back where it belongs.