In Praise Of The Single Six Revolver
(And A Kind Word For The Colibri .22)

I was recently smart enough to acquire my first Ruger Single Six revolver. Have you got yours yet? No? Well, go get one now. You may not realize it, but you need this gun:

It comes in a variety of flavors and colors. They're all good.

Everyone should have a .22 handgun and the Single Six is perfect, perfect in that it does exactly what an affordable .22 handgun should do. It comes with good sights, a good trigger, and a classic, balanced form which points well for just about everyone. It does not kick, it does not lie, it does not jam, or hang up, or have issues with that bulk ammo you bought at K-Mart. It just works.

You can easily find a new one if newness matters to you, but you'll be giving up very little if you select a nice used one instead. The little Rugers are probably the perfect used gun - cheap, accurate, reliable, and built to last forever. This is literally one of the most durable guns ever made. Unless you find one that's been beaten with a stick and put away wet, odds are it'll work just as well as it did the day it came out of the box.

The Single Six wants to shoot, and it wants you to be a better shot. You can dry-fire it forever without doing it any harm, and dry-fire is the golden key to good shooting. You can cure your flinch in a day by simply leaving a chamber or two empty every time you load up. Its 19th century habits keep you focused and make each shot count. When you do your part it will reward you with a clean hit, every time.

The Single Six wants to be there with you. You don't have to be afraid to handle it, to get it damp or dinged or a little worn around the edges from your holster. It's not jewelry, it's a sidearm, and it belongs there at your side. You won't wear it out. You can't. Nobody cares if you rub some of the finish off, either - they've made millions of these things, and they will make millions more after you're gone. This is not a gun you save for the guy who buys your stuff after you're dead. This one is for you.

The best thing of all is that the Single Six is perfectly happy on a diet of Colibris, and Colibris are the greatest innovation in the firearms world since the discovery of John Browning. Colibri ammo is regular .22 ammo downloaded to airgun power levels. They are quiet, and you can safely shoot them just about anywhere.

Me, I'm lucky enough to live in a rural area, and I have a backstop right there in the yard. I can shoot centerfire rifles whenever I want. But somehow, since I discovered colibris, I shoot probably twice as often as ever I did before.

The effective range is only about thirty feet, but Colibris let you do things you'd never dare try with full-power ammunition. You can just sit in the yard and shoot the tops off the dandelions, hit pine cones out of the branches and fire at leaves floating in the pond. You can knock the icicles off your roof and hunt wasps in your garden. Anything that safe to do with a modern, high-powered pellet gun is safe to do with colibris. You can get a good airgun backstop and even shoot them indoors.

When you can shoot anywhere you'll shoot more, and when you shoot more you have more fun. As an extra bonus, nice quiet ammo does not annoy the wife nearly as much as the loud stuff does.

Colibris do have their faults. They are primer-powered with no gunpowder, and as a result they do not burn as cleanly as regular ammo. They don't always have enough power to exit a rifle barrel and they can leave a lot of gunk behind and may gum up the chamber. The pointy 20 grain bullets won't feed through some actions and certainly won't cycle in semi-automatics. Happily, the Single Six is unfazed by all this. The cylinder pops out for easy cleaning and feeding just isn't an issue. It's like they were made for each other.

It's not match ammo of course, but it's fine for regular use.

My gun is dead stock, bought used, and used much since I've found it. The only modification I've made is to unscrew one of the grip panels and lift one of the two legs of the trigger spring off its resting place. This simple and easy-to-reverse modification significantly improved the trigger pull and did not hinder reliability in the slightest. It came with a .22 magnum cylinder which I have yet to try.

I shoot it best with my trigger finger bent right around the trigger, the crease of the first joint rather than the fingertip doing the work. I also place my finger as high on the trigger as I can, right up against the frame. I normally don't shoot like that, but on this gun, it works like a charm. The sights don't even tremble when the hammer falls.

I dry-fire it almost every day, just a few shots each time, but always with my full attention. It's amazing how much this improves your shooting.

When I teach people how to shoot, this is the handgun I like to start them with. The Single Six is a fine teacher, gentle and clear and forgiving of mistakes. Every function is obvious, unsurprising, and deliberate. You can see everything that matters and understand it at a glance. This is not an intimidating gun. It feels right even in small hands and has just the right heft.

I have a handful of .22 handguns to choose from. The Single Six is not the sentimental favorite, the best made, or even the cheapest. But it is the one that I shoot the most, and shoot the best. I'm happy I found it. 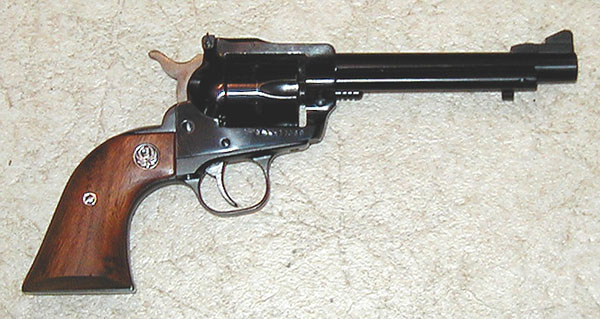 By the way, this sort of fine photography is not easy. No siree. 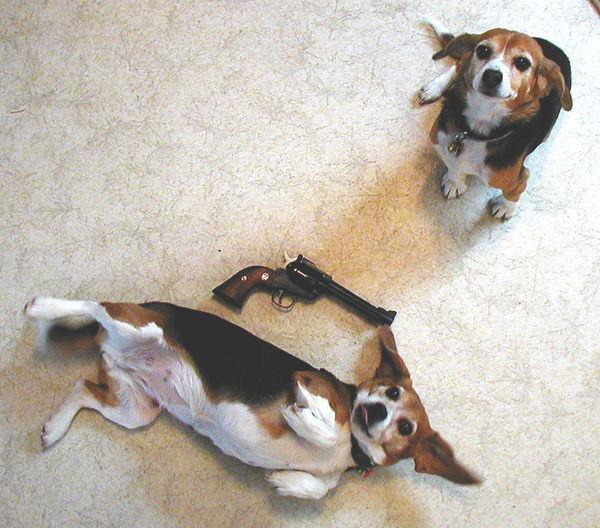 You just barely get started and before you know it, everybody wants into the act. 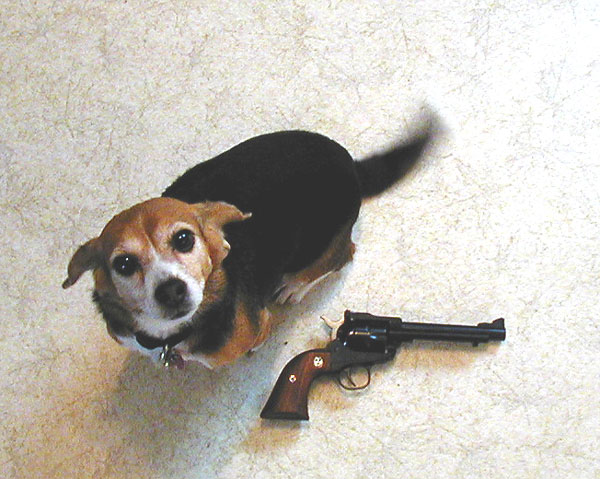 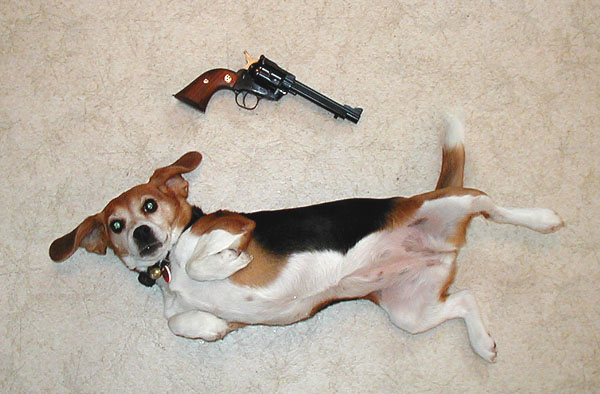