Christmas was good this year.

Someone close to me has a friend in Iraq, a soldier who was tasked with guarding a polling station. He brought us something precious: 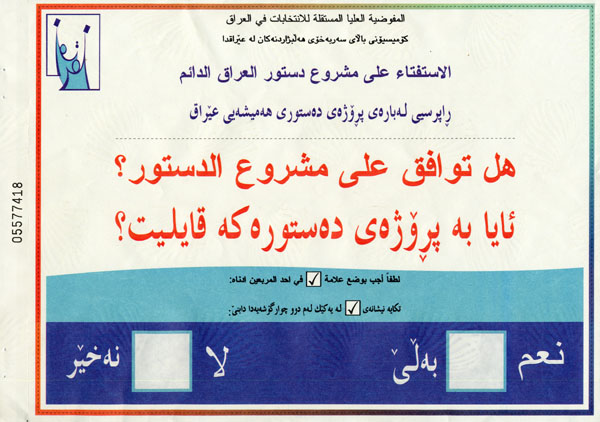 This is a ballot from the vote to ratify the constitution. This was the very moment when a new, democratic republic was born. Twenty-six million people became free that day.

Freedom does not come cheap. From America and her allies, it has demanded years of sacrifice from a quarter million soldiers, about 3% of whom would be wounded, 2000 of whom would be killed. The human cost borne by loyal Iraqi citizens was far higher; it is a small comfort, I suppose, that their final toll will be so much less than what they once paid to endure Saddam.

And even at this price, freedom is worth it. Given the choice, would you rather expose your family to the chaos of Iraq since the invasion, or to decades under Saddam and his sons?

How long did it take you to make that decision?

Perhaps a more trivial comparison will be easier to grasp. There are 16 million eligible voters in Iraq, so probably no more than 20 million of these ballots. By most estimates, we'd spent about 200 billion dollars by the time this election was held. That works out to $10,000 a pop.

That's just the money, the smallest fraction of its real cost.

Saw Narnia. I wish I had liked it more.

Overall, it had great promise. Parts of it were splendid, but they were invariably interrupted by moments which were so clumsy that they broke the spell. Eventually, the clumsy parts won. We even started to hear unintended laughter from the audience during the final quarter of the show. The special effects, awesome in parts, were really uneven as well.

I did want to have sex with the Ice Queen, so it was not a total loss. The Fawn had a creepy child-molester vibe that I couldn't quite get over. The German bombers were cool, and The Wife wants a horse that can talk.

What bothered me most was that the kids achieved nothing during the film. They whined and were indecisive and mostly just did what they were told, and they all got to become kings in the end. The animals around them showed courage and loyalty and initiative and cleverness, protected the children and lead them and handed them victory on a platter, and they all got to be subjects.

The Christian stuff was practically nonexistent, so far as I could tell. The resurrection of Aslan was no more Christ-like than that of Gandolfs, and if there were any references beyond that, I missed them.

I can't imagine how the theaters are going to survive. A decent home system with good sound and a big screen is better - not just better in that there are no commercials or cell phones or $5 popcorn, but just better, period. I saw an ad (or, I should say, I paid to sit through an ad) where the theater was trying to rent its space for business meetings. The idea is, you put your powerpoint presentation on the screen, and your staff sits there and watches it. Really. Seems to me, that's what the death throes of the industry would look like.